Type 1 Diabetes (T1D) is generally viewed as a disease of the immune system, where beta cells are simply ‘sitting ducks’ that are destroyed due to the phenomenon of autoimmunity (self-targeted immunity). Under this paradigm, the vast majority of clinical trials have focused on ways to prevent or cure this disease by re-establishing a functional immune system or blunting the autoimmune response. But what about the beta cells? Are they merely passive victims? Our work is taking a different perspective by investigating how stress responses in beta cells and the interactions with the immune system contribute to disease onset and progression. 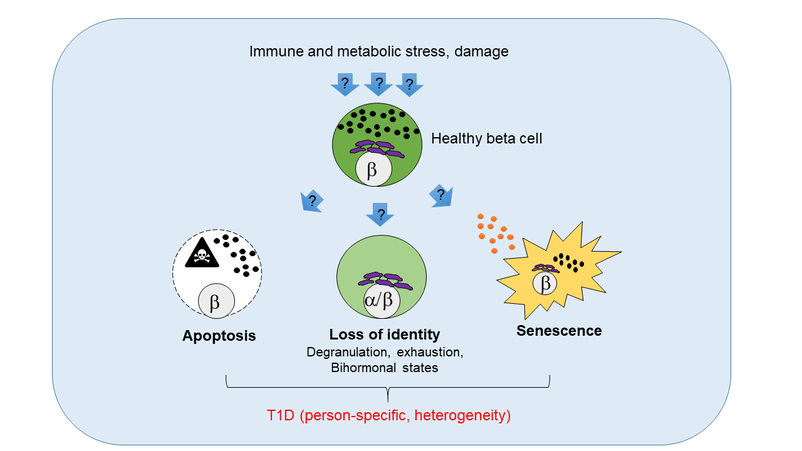 A growing body of evidence indicates that various forms of stress leads healthy beta cells to make different fate decisions and adopt dysfunctional states during the development of T1D. Surprisingly, although it was once believed that all beta cells are lost in people living with T1D, recent work is now showing that in the majority of cases, there may be a substantial proportion of beta cells remaining that have become dysfunctional. In addition to beta cell loss by apoptosis (programmed cell death) due to either ER stress and the terminal Unfolded Protein Response (UPR) or T-cell mediated autoimmunity, it is being appreciated that beta cells can also undergo non-lethal fate changes in T1D, such as the loss of identity (loss of insulin or acquisition of other islet hormones), defects in autophagy and senescence (an anti-apoptotic state of proliferation arrest). The variety of beta cell fate decisions in response to stress may underlie some aspects of the interpersonal variability in T1D (disease heterogeneity). At a cellular level, beta cells themselves are heterogeneous, meaning not all the beta cells in an islet are functionally the same. This phenomenon may also explain the ability of different beta cells to respond differently to the same kind environmental stress. Currently, our knowledge in this emerging field is very limited. The specific environmental triggers and genetic factors that lead beta cells to adopt distinct fates en route to T1D and how this relates to the inherent person-to-person variability in T1D development and onset are important questions. Addressing these fundamental questions will be critical for developing new non-immune-based therapies for T1D that can benefit the most people. 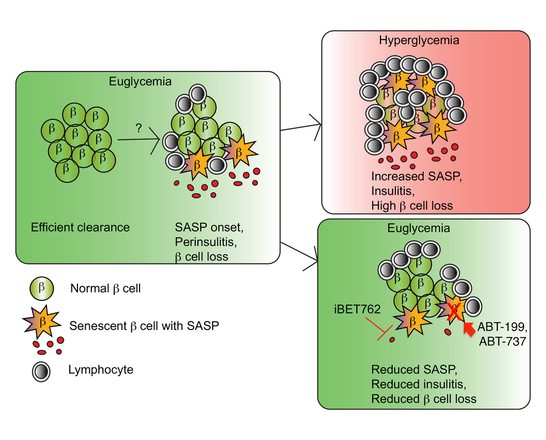 Our work is focused on understanding mechanisms of beta cell  senescence in T1D, which we recently discovered (see Thompson et al. 2019 Cell Metab). During the development of T1D, a subset of beta cells undergo a DNA damage response and enter into a programmed state of cell proliferation arrest (senescence). Once senescent, these beta cells can begin exporting inflammatory chemical messengers that activate the immune system, a process called SASP. The SASP may stimulate the autoimmune response attracting more self-reactive immune cells (lymphocytes) to invade the islet (insulitis) and destroy more beta cells,  a vicious cycle that culminates in T1D onset. Remarkably, when these harmful SASP Beta cells are eliminated with senolytic compounds (ABT-737 or ABT-199), or their SASP is suppressed (iBET-762) early on, healthy beta cells may be preserved and T1D averted in a preclinical mouse model. We are currently investigating the mechanisms of DNA damage, senescence and SASP in beta cells and the interplay with the immune system to understand whether these pathways can be targeted to develop preventive therapies. 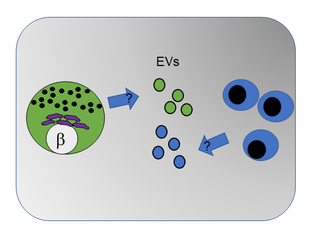 Almost all cells can package and export a subset of their DNA, RNA and/or proteins into small nanoparticle ‘life-rafts’ collectively termed secreted extracellular vesicles (or EVs for short). EVs can be isolated from culture supernatants, blood or other bodily fluids and are emerging as a particularly attractive target for developing new disease biomarkers as well as engineering a means to specifically target the delivery of therapeutics to cells of interest in the body. A secondary theme in our work investigates EV cargo to understand how EVs communicate signals between beta cells and immune cells. We also aim to identify EV-based biomarkers for T1D.

We are currently working on several projects at the intersection of islet biology and immunology in T1D, some of which are outlined below. Our projects utilize a variety of traditional and cutting-edge multidisciplinary approaches spanning endocrine physiology, cell biology, genetics, immunology and pharmacology to address fundamental questions about T1D and develop novel approaches to target beta cell dysfunction and the interplay with the immune system. We allow our research questions to determine the specific approaches, tools and collaborative expertise required to arrive at answers. We use a combination of rodent cell lines, the preclinical NOD mouse model for T1D, and parallel studies on human islets and donor pancreas tissue. Trainees in the lab will develop a broad skill set and expertise relevant to a variety of future career goals.
1. Effect of anti-CD3 therapy on senescent beta cells in T1D.  Teplizumab is an anti-CD3 monoclonal antibody therapy that was recently approved by the FDA to delay symptomatic T1D in those at risk. As such, it represents the first treatment with clinical efficacy in slowing the progression of the disease - a major advance for the field and families affected by T1D. However, the mechanisms of action of Teplizumab and specifically its impact on beta cell function long-term, remains unclear. In this project we are using studies in NOD mice to model the effect of anti-CD3 monoclonal antibody therapy to understand whether it may impact the development and/or turnover of senescent beta cells.

4. Delineating the effect of senescence on human islet function.  Our initial studies suggest that senescence does not trigger major problems in beta cell insulin secretion from adult human islets in culture (Brawerman et al. Mol Metab, 2022), however our studies suggest defects in  glucagon secretion as a consequence of senescent beta cells in islets (Brawerman et al. Front Endocrinol, 2022). In this project, we are performing in-depth molecular and metabolic profiling to study how senescence alters the human beta cell transcriptome and metabolic programs and may negatively impact alpha cells.